His work ranged from vernacular verse celebrating peasant life in Jamaica to poems challenging white authority in America, and from generally straightforward tales of black life in both Jamaica and America to more philosophically ambitious fiction addressing instinctual/intellectual duality, which McKay found central to the black individual’s efforts to cope in a racist society. Consistent in his various writings is his disdain for racism and the sense that bigotry’s implicit stupidity renders its adherents pitiable as well as loathsome. As Arthur D. Drayton wrote in his essay “Claude McKay’s Human Pity”: “McKay does not seek to hide his bitterness. But having preserved his vision as poet and his status as a human being, he can transcend bitterness. In seeing ... the significance of the Negro for mankind as a whole, he is at once protesting as a Negro and uttering a cry for the race of mankind as a member of that race. His human pity was the foundation that made all this possible.” 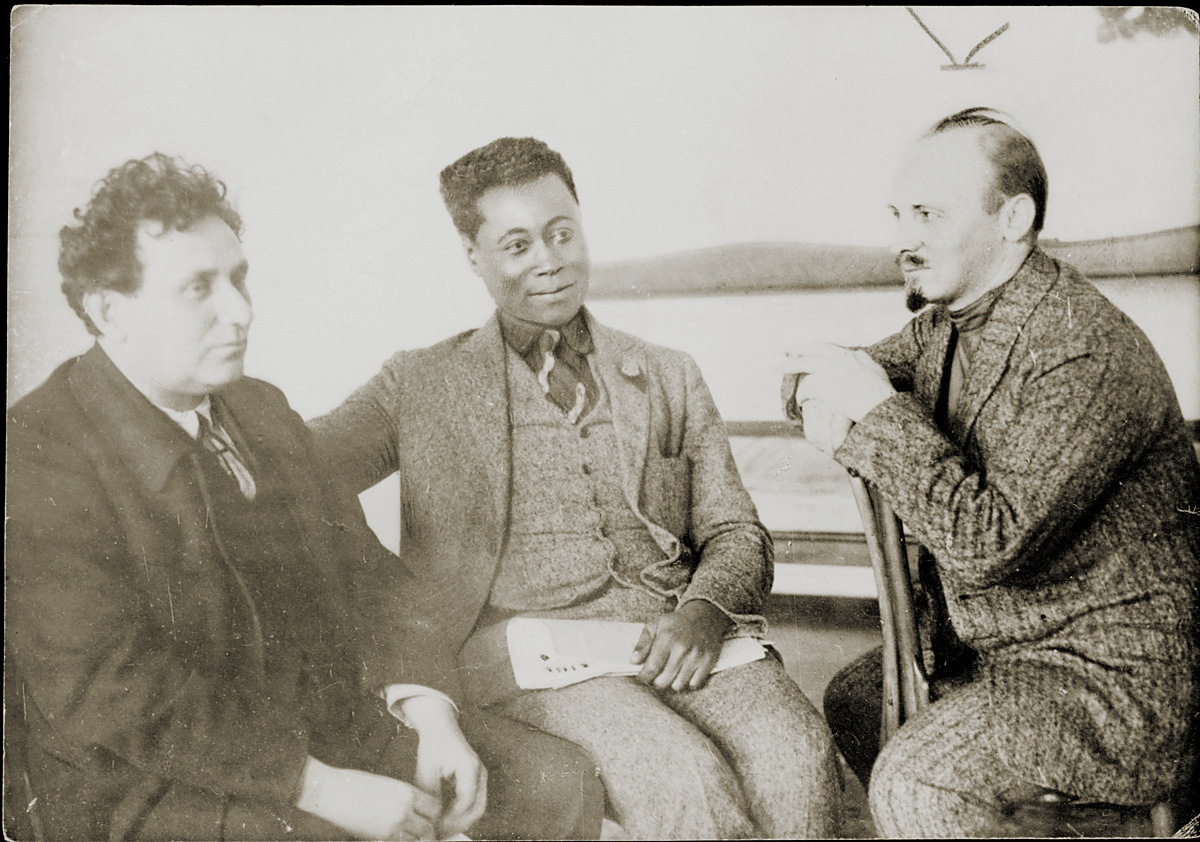 McKay with Grigory Zinoviev and Nikolai Bukharin in 1923.

McKay is regarded as the "foremost left-wing black intellectual of his age" and his work heavily influenced a generation of black authors including James Baldwin and Richard Wright.

McKay was born in Sunny Ville, Jamaica, in 1889. The son of peasant farmers, he was infused with racial pride and a great sense of his African heritage. His early literary interests, though, were in English poetry. Under the tutelage of his brother, schoolteacher Uriah Theophilus McKay, and a neighboring Englishman, Walter Jekyll, McKay studied the British masters—including John Milton, Alexander Pope, and the later Romantics—and European philosophers such as eminent pessimist Arthur Schopenhauer, whose works Jekyll was then translating from German into English. It was Jekyll who advised aspiring poet McKay to cease mimicking the English poets and begin producing verse in Jamaican dialect.

In 1917, under the pseudonym Eli Edwards, McKay published two poems in the periodical Seven Arts. His verses were discovered by critic Frank Hattis, who then included some of McKay’s other poems in Pearson’s Magazine. Among McKay’s most famous poems from this period is “To the White Fiends,” a vitriolic challenge to white oppressors and bigots. A few years later McKay befriended Max Eastman, communist sympathizer and editor of the magazine Liberator. McKay published more poems in Eastman’s magazine, notably the inspirational “If We Must Die,” which defended black rights and threatened retaliation for prejudice and abuse. “Like men we’ll face the murderous, cowardly pack,” McKay wrote, “Pressed to the wall, dying, but fighting back!” In Black Poets of the United States, Jean Wagner noted that “If We Must Die” transcends specifics of race and is widely prized as an inspiration to persecuted people throughout the world. “Along with the will to resistance of black Americans that it expresses,” Wagner wrote, “it voices also the will of oppressed people of every age who, whatever their race and wherever their region, are fighting with their backs against the wall to win their freedom.”

Upon publication of “If We Must Die” McKay commenced two years of travel and work abroad. He spent part of 1919 in Holland and Belgium, then moved to London and worked on the periodical Workers’ Dreadnought. In 1920 he published his third verse collection, Spring in New Hampshire, which was notable for containing “Harlem Shadows,” a poem about the plight of black prostitutes in the degrading urban environment. McKay used this poem, which symbolically presents the degradation of the entire black race, as the title for a subsequent collection.

McKay returned to the United States in 1921 and involved himself in various social causes. The next year he published Harlem Shadows, a collection from previous volumes and periodicals publications. This work contains many of his most acclaimed poems—including “If We Must Die”—and assured his stature as a leading member of the literary movement referred to as the Harlem Renaissance. He capitalized on his acclaim by redoubling his efforts on behalf of blacks and laborers: he became involved in the Universal Negro Improvement Association and produced several articles for its publication, Negro World, and he traveled to the Soviet Union which he had previously visited with Eastman, and attended the Communist Party’s Fourth Congress.