Her literary work helped sculpt African-American literature in the 1920s as she focused on portraying a true image of African-American life and history. Her black fictional characters were working professionals which was an inconceivable concept to American society during this time. Her story lines related to themes of racial discrimination, "passing", and feminism. From 1919 to 1926, Fauset's position as literary editor of The Crisis, a NAACP magazine, allowed her to contribute to the Harlem Renaissance by promoting literary work that related to the social movements of this era. Through her work as a literary editor and reviewer, she discouraged black writers from lessening the racial qualities of the characters in their work, and encouraged them to write honestly and openly about the African-American race. 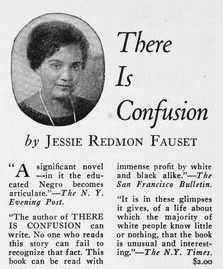 Advertisement for There is Confusion

She wanted a realistic and positive representation of the African-American community in literature that had never before been as prominently displayed.

Before and after working on The Crisis, she worked for decades as a French teacher in public schools in Washington, DC, and New York City. She published four novels during the 1920s and 1930s, exploring the lives of the black middle class. She also was the editor and co-author of the African-American children's magazine The Brownies' Book. She is known for discovering and mentoring other African-American writers, including Langston Hughes, Jean Toomer, Countee Cullen, and Claude McKay.

Jessie Fauset's time with The Crisis is considered the most prolific literary period of the magazine's run.eyond nurturing the careers of other African-American modernist writers, Fauset was also a prolific contributor to both The Crisis and The Brownies' Book. During her time with The Crisis, she contributed poems and short stories, as well as a novella, translations from the French of writings by black authors from Europe and Africa, and a multitude of editorials. She also published accounts of her extensive travels. Notably, Fauset included five essays, including "Dark Algiers the White," detailing her six-month journey with Laura Wheeler Waring to France and Algeria in 1925 and 1926.

After eight years serving as Literary Editor, Fauset found that conflicts between her and Du Bois were taking their toll. In February 1927, she resigned her position. She was listed as a "Contributing Editor" the next month. After leaving the magazine, Fauset concentrated on writing novels, while supporting herself through teaching. From 1927 to 1944, she taught French at DeWitt Clinton High School in the Bronx, while continuing to publish novels.

Fauset was admired by many literary intellectuals during the 1920s. Her first novel, There is Confusion, was applauded by Alain Locke in the 1924 February issue of the Crisis. Locke felt the novel would "mark an epoch" because he believed it was educated literary material that the educated reader anticipated as it shone light on a higher class of black people rather than the usual "servant" type of character that was portrayed in past literature. In the 1924 June academic journal Opportunity, Howard University professor Montgomery Gregory gave praise to Fauset’s work because he felt she made clear of the "better elements" of African-American life "to those who know us only as domestic servants, 'uncles', or criminals". Although Fauset received many positive reviews on her literary work in the 1920s, she also faced negative feedback as well. Her new literary perspective was not received with open arms by everyone because it went against the stereotypical image white Americans made of middle-class African Americans. The first publisher ever to see the There is Confusion manuscript rejected it, saying that "white readers just don’t expect negroes to be like this". Despite the mixed discussion on Fauset’s work in the 1920s, by the 1930s people stopped talking about her and she became a forgotten writer. Locke felt that the reason people stopped talking about Fauset was due to a change in the literary scene because of the Great Depression and Second World War.